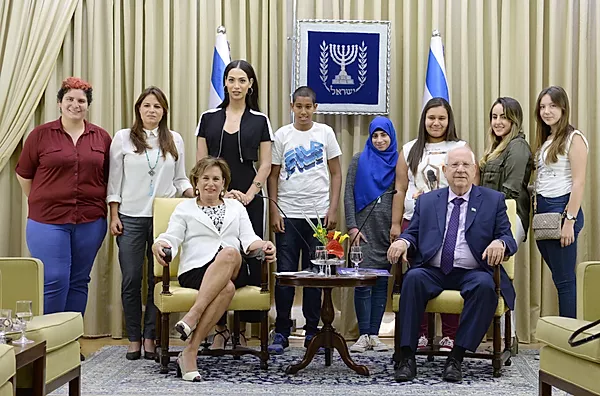 Presentation of ELEM’s annual report on troubled youth in Israel.  Nava Barak, president of ELEM Israel and Israeli President Reuven Rivlin (seated) and youth who have been helped by ELEM

New York, N.Y. – (May 16) — ELEM/Youth in Distress, Israel’s leading non-profit organization aiding youth-at-risk, presented its annual report on the state of troubled youth to Israeli President Reuven Rivlin. The report was presented on May 8 by the President of ELEM Israel, Nava Barak, ELEM’s CEO Inbal Dor Kerbel and youth receiving aid from the organization. The organization was founded by U.S. and Israeli social workers 35 years ago.

ELEM’s report data is based on information collected from approximately 20,000 youth assisted in 2016 in 80 projects in throughout Israel and 100,000 youth who contact ELEM via its online portal. The report showed that the numbers of youth who are in need of help in Israel is growing and that youth involved in certain activities such as prostitution are difficult to identify due to an increase in activity online.

“ELEM is at the forefront of the work with teens and young people at risk,” said President Rivlin. “ELEM’s annual report is a mirror, and this mirror forces us to see the complex and difficult lives of youth and young people at risk. The State of Israel has a well-developed, excellent welfare system, and despite this, you meet too many homeless youth. I place great weight on the rehabilitation process, and believe we need to allow youth to open a new page, stand on their own two feet and build their lives in a positive way.”

– Nineteen percent of the youth and young people ELEM works with are homeless or living outside a home setting, some without any type of family support.

Of these, 24 percent are homeless youth who sleep every night on the street, in “hangouts” or in public parks. Six percent live in places that pose danger, such as abusive homes or at a stranger’s home, in exchange for sexual services.

–  There is increased activity among at-risk youth in Arab society. In 2016, 1,442 Arab youth received assistance from ELEM.

Of the youth who received assistance at the ELEM Youth Centers in Bedouin villages, all are living in poverty and without stable, permanent homes. Seventy-four percent have experienced violence or were involved in violence and 30 percent are involved in some form of prostitution.

“Youth in Arab society often face the harsh realities of poverty, lack of basic infrastructure, including health services and education, compounded with the issue of belonging to a minority in Israel and questions of identity,” said Inbal Dor Kerbel, CEO of ELEM Israel. “Youth from the Arab community are integrated into ELEM’s youth centers in the Bedouin villages of the Negev; centers treating minors involved in sexual abuse and violence; outreach vans active at night, programs for prostitution; homeless youth centers and mentoring and employment programs.”

– Five percent of the youth and young people receiving assistance from ELEM injured themselves or committed suicide.

Of these, 588 committed self-injury such as cuts, burns and injuries to different parts of the body. According to the findings, self-injury and suicide were three times more common among girls than boys. 9,000 youth in this category reached out to Y-Elem, ELEM’s website providing psychological support and consultation, resulting in 1,860 therapeutic interventions.

– Four percent of the youth and young people receiving assistance from ELEM are involved in some form of prostitution.

Reut Guy, who heads the Girls Division at ELEM commented, “Involvement in prostitution is usually a hidden from sight in strip clubs, parties, the streets, spas and on the Internet and therefore difficult to measure. Many minors provide sexual services, but are not aware that they are involved in prostitution. We are seeing an increase in the phenomenon of prostitution occurring in chat rooms on the Internet, in closed Facebook groups and on seemingly innocent dating sites, which makes identifying minors even more difficult.”

To learn about ELEM’s activities in the U.S., please visit www.ELEM.org.

ELEM/Youth in Distress in Israel was founded in 1982 by a group of American and Israeli professionals and lay volunteers to help Israel’s population of at-risk youth become productive citizens. Today ELEM is Israel’s leading
non-profit organization dedicated to the treatment and rehabilitation of abused, neglected, and adjudicated Jewish and Arab Israeli youth. The youth ELEM serves face tremendous hurdles; many live below the poverty line or struggle to assimilate as new immigrants. With a network of 250 professionals and almost 2,000 volunteers, ELEM is able to reach tens of thousands of youth each year. ELEM provides a unique brand of non-judgmental, innovative counseling and services, including group and individual therapy, mentoring, occupational and educational placement and vocational training. ELEM operates a network of counseling and support centers in 40 cities across Israel and a fleet
of outreach vans that take to the streets to reach the hidden “children of the night.”